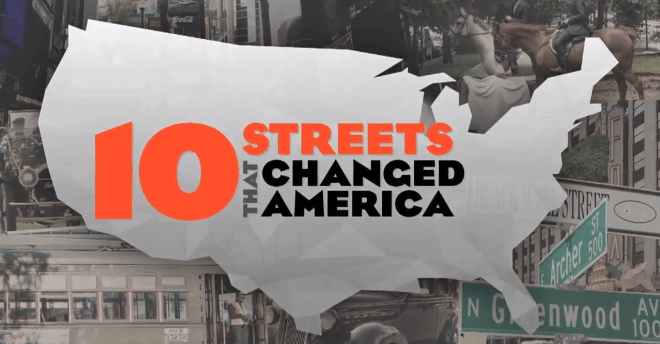 Dan Marriott, Penn State alumnus, Stuckeman School assistant teaching professor of landscape architecture, and international expert on historic roads, was an advisor to and is featured in the PBS episode, “10 Streets That Changed America.” The episode will air on PBS on Tuesday, July 10, at 8 p.m. Stuckeman School writer Christiana Usenza had a chance to interview Marriott about his work on the episode.

Q: How did you become interested in historic roads?

A: It goes back to my undergraduate degree in landscape architecture at Penn State. When I was taking Landscape Architecture 60, which is still Landscape Architecture 60 today, I learned about the Bronx River Parkway in New York, which was the first automobile parkway in the world. I was so intrigued by that – especially from growing up in Washington, D.C. with the parkways that connect the city in a variety of ways. This idea of these beautiful green pleasure drives was part of my growing up. After I graduated, I drove up to Westchester County, and I traveled the road.

I was disappointed to find out that the southern third of the road had been destroyed and turned into a freeway in the 1950s. Part of the leafy, gauzy image of the parkway I got from history class had been destroyed, and I realized it was an issue: these beautiful roads are historic resources.

Years later, I ended up working at the National Trust for Historic Preservation. We got a call from Westchester County about this parkway that I learned about at Penn State, so I jumped on it right away and went to Westchester. I started working with the preservation office and realized that the problem wasn’t so much bad local policy but that our national transportation policies didn’t recognize historic roads, or the strong design characteristics, or the strong legacy and influence of landscape architecture on the roads.

So, I wrote a policy paper about the lack of national awareness, which morphed into a larger paper, which morphed into my first book, Saving Historic Roads (1998). At the National Trust, people started coming to me about historic roads more broadly. So, I started being known as the “road guy.” My career took an unexpected turn into preservation policy for historic roads. That’s what I have been doing for the last 30 years.

Q: How did you get involved with the PBS series?

A: In the spring of 2017 I got a random call from PBS saying they were working on this episode on historic streets for the documentary series, “10 That Changed America.”  The series is all about the built environment, which is, of course, what we focus on at Stuckeman School.  It is exciting for me, because this is the first time that PBS or any mainstream media has acknowledged road resources as a legitimate aspect of heritage. So, they asked me if I would review the list of 10, and then asked if I would be an advisor, and then asked if I would be an on-air talking head for the program, and that’s how it evolved.

Q: What is the premise?

A: This series is about 10 places that changed the way we think about the built environment and that caused us to do things differently in America. For example, one road we concentrated on is the Lincoln Highway – the first transcontinental highway from New York to San Francisco. It goes right across Pennsylvania (Bedford) and most people know it as U.S. 30 today. Before the Lincoln Highway, we were a railroad nation and people assumed long-distance travel was by train. They thought the Lincoln Highway was a crazy idea in 1913…that it would never work, people would never use it and never travel across country by automobile. The Lincoln Highway completely changed that perception for us.

Q: What are some of your favorite roads?

A: Yes, part of my Ph.D. research examined the origin of streets, roads, and transportation – in terms of the modern highway era in the 20th century and up to World War II. I found that landscape architects were instrumental in highway design and there is a huge legacy in the profession that is gradually being lost. I really hope I can help to raise awareness as a professor at Penn State to the fact that our profession is really instrumental to these ribbons across the landscape and how people engage with the landscape and scenery, the beauty of travel, and all of that.

The episode will air on PBS on Tuesday, July 10, at 8 p.m. If you can’t watch it on PBS, you can watch it anytime online.

Peter Stempel, associate professor of landscape architecture, is part of a research team that was awarded a four-year, $1.5 million grant through the National Oceanic and Atmospher

Puja Bhagat, a fifth-year architecture student and Schreyer Honors College scholar, was named the winner of the Department of Architecture’s 2021 Corbelletti Design Charrette.

Third-year graphic design student Taylor Kuszyk has earned national recognition for her work, collecting two honorable mentions in the UCDA Design Awards and another in Graphex 52.